Farmdrop: Delivering goods in a transparent and ethical manner

In just a few months, Farmdrop has seen double digit improvements in driver behaviour and fuel/energy use in its fleet of electric delivery Vanimals. With a custom-tailored solution and driver behaviour Add-On, Farmdrop was able to monitor electric energy use and fuel high engagement among drivers for impressive early results.

“Geotab has helped us make our fleet safer and more efficient. Using the driver behaviour Add-In, we have seen a 33% reduction in incidents of poor driving per mile. We have also seen a 27% reduction in the kW/mile we need to execute our London, Bristol and Bath routes.” Mike Pearson, Head of Growth, Farmdrop Limited.

The Challenge: Delivering the Goods in a Transparent and Ethical Manner

UK-based Farmdrop is an ethical grocer, supplying local and sustainably produced food via an online grocery platform and mobile app. As a company with a strong brand ethic, Farmdrop adopted telematics as a way to extend their responsible and ethical business approach to their delivery operations.

Mike Pearson, Head of Growth for Farmdrop explains, “Farmdrop's mission is to fix the food chain and so reducing emissions from food delivery is important to us. That's why we use 100% electric delivery vehicles wherever possible. Geotab's technology lets us know where our vans are, and how they are driven, saving us both time and money.”

Benefits of the Geotab Solution

Farmdrop needed to have insight about van location and delivery status, and also how their Farmdroppers (drivers) were operating the vehicles. However, tracking the company’s fleet of fully electric Nissan NV and Renault Kangoo electric vans brought with it several operational challenges.

The Solution: Geotab Charges Up This Unique EV Fleet

The Farmdrop fleet has been equipped with Geotab GO devices since March 2018, primarily to monitor driver behaviour and location and vehicle charge level.

There are several key reasons why Geotab is a good fit for Farmdrop: user-friendliness of the software; outstanding support and flexibility from the Geotab Reseller; cost-effectiveness; and expandability. Geotab ticks the boxes, both from a usability and business perspective. The fleet manager can quickly see understand a wealth of fleet information and the driver can also have access to view their performance. Pearson says, “We've not been given a one-size-fits-all product.”

Telematics Insights for a Green Fleet

Compatibility with EVs is another key Geotab advantage, since Farmdrop’s entire fleet is electric. A different telematics supplier Pearson was considering could not read the information coming out of the vans’ electric power plants. Geotab had spent time developing a way to capture this data and generate meaningful reports — which was probably the tipping point for Farmdrop choosing Geotab as its tracking solution.

Getting Drivers On Board with Gamification

Although the implementation went smoothly from a technical perspective, there was some initial pushback from drivers. Pearson used The Driver Challenge gamification solution from the Geotab Marketplace to gamify the driver’s experience, which has led to high engagement and acceptance from the drivers. Farmdrop measured driver performance based on speeding, seat belt use, harsh braking, acceleration and cornering.

“The majority of drivers who've picked it up in a positive way want to beat their own score and want to beat their peers' scores on a monthly basis. And so actually it becomes an interactive solution and they get enjoyment out of seeing their scores improve,” says Pearson.

The insights on driving trends also becomes a useful tool for the management team. 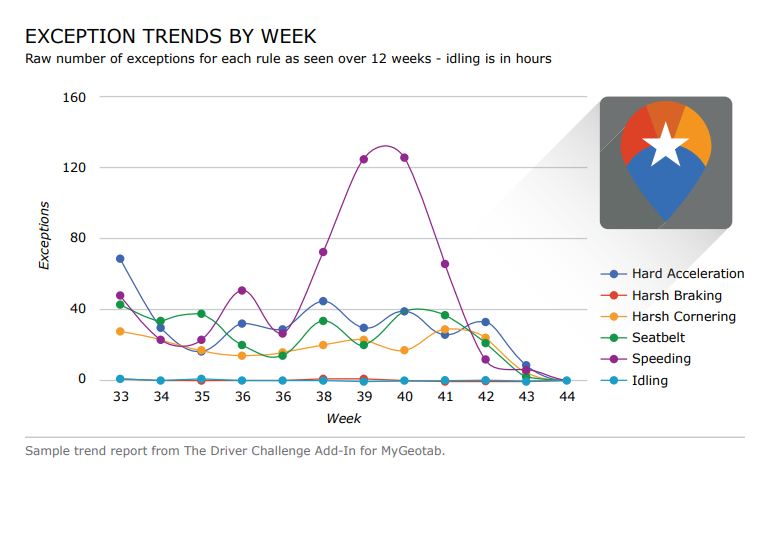 The high engagement rate from drivers has already resulted in impressive results. The primary goal of adopting Geotab — improving driver behaviour — has been achieved. In only four months, there has been a 33% reduction in instances of poor driving behaviour at Farmdrop.
“We just saw such a drop off of the manner in which people were driving and it was unbelievable,” says Pearson.

This improvement in driver behaviour had another benefit — drivers were using 27% less power in their vehicles.

“We thought that a 33% reduction in poor driving incidents was meaning that we were safer out there on the road, safer for cyclists, safer for other road users. We hadn't understood the impact that it was having, that, if you drive a vehicle far more smoothly, you save fuel, which obviously is what you'd hoped,” says Pearson. “There was no other change in our operation or our management at the same time as that trend.”

As for the future, Pearson is hoping to integrate the Geotab functionality into its customer service operation to alert customers about delays in their orders and to give exact estimated time of arrivals (ETAs). He also hopes to integrate the company’s separate route planning software with Geotab to monitor and measure driver downtime.

The relationship between Farmdrop and the Geotab Reseller is reciprocal. Both companies are learning and benefiting. “There's a bit of a collaborative relationship in that we're learning about how the Geotab GO works, and they're really learning how a company that's dedicated to electric delivery vehicles seeks to operate.”

Farmdrop continues to lead the way in showing how businesses — and fleets — can be safe, productive, ethical, and successful all at the same time.

Based in Aberdeen, Scotland, Caledonian Logistics has carved a niche in the logistics industry, specialising in the movement of palletised goods. To deliver the goods quickly and reliably, the company need all systems functioning at peak condition, including telematics.

Actemium: Making a case for EVs

EV experts with a mission to transition their fleet from petrol/diesel to electric.

Ready to optimise your fleet?