Published on May 6, 2016 in Fleet Management by Geotab Team

Read about the ups and downs of localizing our MyGeotab gps fleet tracking software - to French, Spanish, German, Japanese... and English!

Currently, the core of the MyGeotab gps fleet tracking software solution is available in English, French, Spanish, German, and Japanese. Why does Geotab bother with translation, when English is the lingua franca of the IT world?

It boils down to the fact that — no matter how good a person’s conversational English is — feature-rich software requires the communication of numerous industry-specific ideas to be understood. If a user can’t tell a “cancel” button from an “okay” button, that software will quickly go from useful to useless.

That’s where translation comes in: it opens up the ideas of the product to the customer. Geotab localizes our software to be seen, heard, and, most importantly, understood. The process of localization is more than translation, it is the adaptation of the software to the specific region.

By the way, did you know Geotab has French, Spanish, and German language websites as well?

From bursting buttons to ballooning drafts, we have seen it all in our translation journey. Here are examples of some interesting peculiarities encountered during localization.

Visualization of the Distribution of Word Lengths by Ravi Parikh (www.ravi.io)

It might not seem like much difference, but it does have an impact. In translating the user interface elements, a difference of even a few letters can prove to be troublesome. As you can see below, with the longer word, the button has lost visual symmetry. A simple translation job now involves the web designer — who has to resize the user interface (UI) elements and look for other visual aberrations.

If you translated 1000 English words into Spanish, you would have a 40% increase in length, or about 400 additional words. In our case, what were once beautifully formatted single-page documents in English ballooned into awkward one-and-a-half page documents when translated into Spanish. The solution isn't always simple. Sometimes you can adjust the margins, spacing, and image sizes, or attempt minor re-writes, but sometimes the difference in page length must be accepted.

Localizing the Japanese language is a particularly interesting case (and similar issues appear in the Korean and Chinese languages).

The Japanese language uses three alphabets, one of which (called Kanji) is logographic and has approximately 2000 commonly used characters. These Kanji logograms can become quite complex.

As you can imagine, at font sizes comfortable for Latin characters, the numerous tiny strokes of Japanese kanji become blurry and difficult to decipher. This is easy enough to correct by increasing the font size.

However, a less obvious and more technical issue is the matter of the font itself. It takes an almost Herculean effort for a font designer to create some 2000 characters worth of font — and Verdana, Arial, and Helvetica fonts were not designed with Japanese in mind.

With all of your favorite fonts unable to render Japanese kanji, you're left with a spindly system font that displays the kanji at a bare-minimum level of legibility. The image below illustrates a system font contrasted with a properly-designed font for Japanese characters (Noto Sans Japanese). 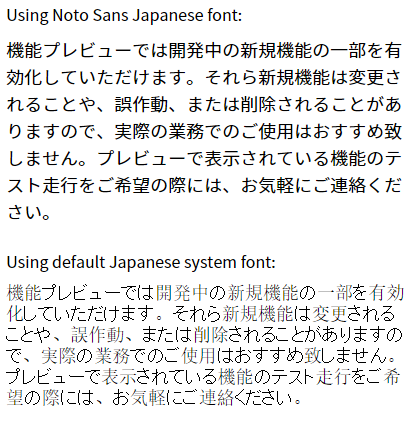 The difference is apparent, even to those of us who do not read Japanese. Luckily, the actual implementation of a new font is simple and the benefit to the reading experience of Japanese users is significant.

So what does localizing for English mean? Within the English-speaking world, there are differences in vocabulary, grammar, and spelling. For instance, what I know as the hood of a car is referred to as a bonnet in the UK and Australia. There are many other differences, including litre vs. liter, inquire vs. enquire, travelling vs. traveling, using Ss instead of Zs — and this in itself is a 'zee' vs. 'zed' affair — as in 'realize'/'realise', or where to place punctuation in relation to quotation marks.

If overlooked, all these little differences can distract the reader and take their attention away from the content at hand. It may even outright confuse them in the case of word differences like hood/bonnet. English is surprisingly varied and it takes some extra care to stay aware of all the little things.

Why Does Language Matter in GPS Fleet Tracking Software?

Making that extra effort to discern that a form of Peninsular Spanish might not make a whole lot of sense to our South American customers, or understanding that em-dashes aren't used in German the way they are in English, are all bright points in our localization efforts. The ultimate goal is a clarity of interaction and a feeling of comfort for the customer — them knowing that they can communicate in a language that won’t lead to a bad business decision.

In that regard, our communication efforts go beyond the written word. We're quite proud of the team we've assembled, which includes speakers of English, German, Spanish, and French. And we're always trying to accommodate even more customers in their native language. Visit the Geotab website in German, French, or Spanish to learn more about our telematics solution.