Published on July 21, 2014 in Compliance by Mike Murkovic

Pros and cons of the updated Hours of Service (HOS) 34-hour reset rule for drivers in the United States. Read how the 34-hour reset works.

[Update] On December 16th, 2014 the H.R.83 bill was signed, which removed the requirement that drivers take off two consecutive periods of 1 a.m. to 5 a.m. during a 34-hour restart and a 168-hour minimum period between the restarts. The Geotab Drive version 3.1.2 implements the rule change on December 23rd, and it is recommended to upgrade to the latest version. Geotab servers will be upgraded in the new year with the latest changes of the HOS rule system.

The updated Hours of Service (HOS) 34-hour reset rule for drivers’ cycle resets has been in place for about a year in the United States, but the rule has still has not managed to reach a plateau of acceptance. According to the FMCSA, “truck drivers who reach the maximum 70 hours of driving within a week” which includes an “11-hour daily driving limit and 14-hour work day limit” can resume only “if they rest for 34 consecutive hours. [1]” This has reduced the workweek for truck drivers – from 82 hours to a maximum of 70.

The Pros and Cons

Some groups believe the one-month of laboratory testing that was used to establish the new regulations is insufficient to justify the increased costs and lowered productivity that is expected to result. Meanwhile, others support the regulations and believe that they are a positive step towards decreasing driver fatigue and the number of accidents on the road. An FMCSA administrator, Anne Ferro, stated “over 13 percent of commercial drivers involved in a crash were considered to have been fatigued at the time of that crash. [2]”

How the 34 Hour Reset Works

The 34-hour reset is available on the 60/70-hour cycle, which counts the on-duty time on a rolling 7/8-day basis. The consecutive off-duty stretch of 34-hours must include two rest periods from 1 a.m. to 5 a.m. and may only be used once per week. If it’s taken twice a week, then the driver must select which 34-hour break will actually be used as a reset. The new rules can be tricky to use because any driver who starts before 7pm or after 1am, could need up to 51-hours to perform a reset [3]. However, use of the 34-hour reset is optional, and if the drivers or dispatchers plan ahead carefully, it will not be necessary. 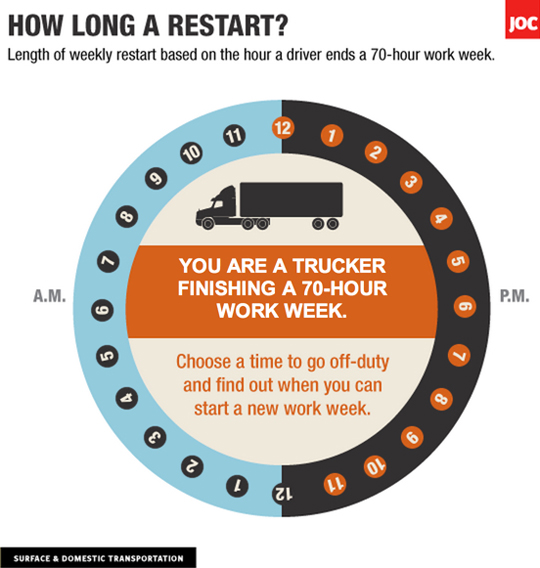 US Senate Attempt To Suspend The Rule

The annual Transportation, Housing and Urban Development bill was passed by a bipartisan vote of 21-9 when it came to the senate floor in June, and it includes an amendment trying to suspend the July 1st 34-hour requirement (1am to 5am and once a week changes)[4]. The main justification was the lack of research into the effects on drivers and many other groups.

The Senate argues that the new rules make it tougher for drivers, harder for the carriers who are scheduling the drivers, and it also costs more money because it places too many drivers on the road during morning rush hour [5]. As of right now, the Senate Majority Leader, Harry Reid, has prevented this bill from going forward. However, there are still many groups voicing their dissent over the 34-hour rule.

The recent collision between a Walmart truck and a limousine carrying several notable celebrities has brought a lot of attention to the 34-hour rule, as the truck driver’s fatigue has been stated as the cause. The media, lobbyists, and politicians have all pointed to the need for the 34-hour rule as a means to limit driver fatigue and prevent these types of incidents.

With the Geotab Drive application for Android (and soon iOS for Apple), Geotab allows a driver to easily keep track of their HOS duty status, as well as retrieve details surrounding availability, violations, and DVIR. Geotab automatically picks up a 34-hour consecutive off-duty period and resets your cycle availability, so that you are able to get back on the road without having to use a calculator. If more than one 34-hour off-duty period is taken within a week, Geotab Drive will evaluate each possible scenario and select the reset that gives the driver the most availability and fewest violations.

Whether the July 1st 34-hour rule is suspended or stays in place, Geotab will keep up to date on both the legislation and regulations, and will continue to make it easier for drivers to understand and comply with their HOS availability.

Please leave your questions or comments below to let us know what you think of the 34 hour reset rule.

Canadian ELD: Does your ELD have to break the bank in Class 8?

Learn how ELD solutions can be a cost-effective option for Class 8 fleets.

The Canadian ELD mandate deadline is approaching. Are you prepared?