Taking a safe trip across Africa with Geotab

Published on September 5, 2013 in Driver Safety by Geotab

10 months of travel and some of the worst roads imaginable - this is the story of how a customer used Geotab technology to make a safe trip across Africa.

Crossing Africa has always been one of my greatest ambitions, so when the chance came up to do it I grabbed it with both hands.  My son, Dylan had turned 21 and was willing and able to take on this adventure too before settling down and finding work.  And it would be fitting to spend some time together considering my preoccupation with the business that I ran for 17 years and his 12 years at school.  So now there were two of us.  Father and Son, ready to take on the great Continent of Africa.

After searching for a vehicle, we got lucky almost on the first attempt to source one on the Internet.  It was a 2005 Land Cruiser Pick Up, with a 4500 EFI Petrol Engine.  The Double Cab conversion had been done and it came with two rooftop tents and many useful camping features and spares.  You will find it interesting to note that with some camping experience under the belt in Southern Africa, we soon realized that the modifications required for a cross continent trip would be vastly different to a more local cross border trip.  This led to mods such as a built in water filtration system, a 4 battery auxiliary system with inverter for 230 Volts and a built in computer system with Tracks 4 Africa.  Two portable solar panels that could keep the Engel fridge going for a few days in camp seemed pretty important too. 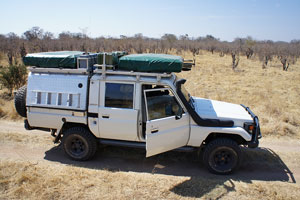 After completing all the modifications and buying additional gear required, which included a small inflatable with an 8hp motor, the question of safety for us and the vehicle raised its head again.

Finding special insurance for the vehicle and equipment to cross Africa wasn’t too difficult, just expensive.  Finding some company that could track the vehicle across Africa was much more difficult.  And this is where Geotab came in.  So far as we could establish, this was the only local company we could talk to that could track us across the entire continent.  In addition, GEOTAB fitted a panic button in the vehicle that we could activate if we ran into severe difficulties.  With a reasonable spread of agents on our route, Geotab would have been able to send one of their people somewhere in our region to come and find us.  When we found a reasonable Internet connection, we were also able to find our exact location on the map and even see the vehicle parked in a parking lot.  All the trip data got recorded on the tracking device, and so we returned home with a considerable amount of information regarding the routes taken and time to travel them. 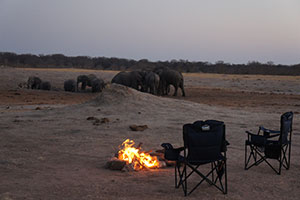 Our journey took us through Botswana, Zimbabwe, Zambia, Malawi, Tanzania, Zanzibar, Kenya, Uganda, Ethiopia, Sudan and Egypt (although we left the vehicle in Sudan and took to the Nile in Egypt). Geotab tracked the vehicle the entire way.  And although we fortunately did not need to use the Geotab panic button set up, it was great to know it was there, particularly since my Wife, Bernadette and my Daughter, Savannah joined us in several countries up North.  My wife, finally finished the trip with us through the most difficult and dangerous countries on the trip. We may well have encountered trouble crossing Northern Kenya, Ethiopia, Sudan and even Egypt. 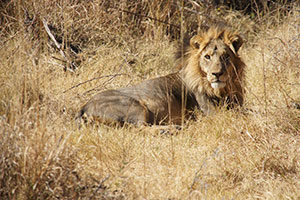 We returned home with a far different approach and views on the continent we live on to South Africa, after 10 months of travel on some of the worst roads the imagination can conjure up and after seeing some mind blowing sights.

Thanks Geotab for tracking us safely on our journey.
- James Robert Swemmer

Save time and maximize the safety benefit for drivers.

9 ways to winterize your vehicle

Adapting to winter weather is a critical step when looking to improve fleet performance.