The Challenge: Making EV delivery competitive in a diesel-centric world

Established in 2008, Gnewt (Green New Transport), by Menzies Distribution, has the UK’s largest fully electric commercial vehicle fleet. Delivering zero-emission final mile logistics for retailers and third-party logistics companies, Gnewt’s fleet of double payload modified vans has transformed green deliveries in London – growing from just a handful of vans into the UK’s largest all-electric fleet. Its routes span across the city, with expansion plans for other cities in the near future. Over the last ten years it has delivered around 10 million parcels, with each driver travelling approximately 25 miles a day, making 50-60 drops equating to anywhere between 100 to 150 parcels.

As part of electrification, Gnewt’s challenge was to build on foundations of nascent, complex infrastructure while competing with firmly established – and often cheaper – internal combustion engine (ICE) delivery companies. To add to this, there is physically only a finite amount of power coming into its charging depot. Only 35 vehicles a day could be fully charged at first. To combat these constraints, drive greater scalability, and provide a platform for future innovation, Gnewt needed a telematics solution that could transform how it views and models its fleet’s charging operations – one that could directly feed in vital intelligence on vehicle state of charge, as well as which vehicle is being charged, and when.

The key to success was an API that could provide cross-fleet visibility into state of charge and charging status. By integrating the Geotab platform into its on-site charging infrastructure, Gnewt immediately had access to the most comprehensive vehicle and charging data possible.

The real-time fleet insights, organised and verified in the cloud, allowed the team to make informed, algorithmic calculations on how best to charge within the building. “We've rolled out this process on a scale potentially bigger than anyone else in the country or perhaps even the world,” says Sam Clarke, Founder of Gnewt. “I'm not aware of privately-owned smart charging infrastructure of this magnitude anywhere else in the UK.”

Compatibility with multiple makes and models simplifies roll-out and management

Another vital success factor was the ability to roll the platform out across the entire fleet. Gnewt operates a mixed vehicle fleet, licensing vans from various OEMs (Original Equipment Manufacturers). While modern vehicles are becoming more intelligent in isolation, many with their own basic telematics pre-installed, the competing and incompatible OEM solutions can make for a complex fleet management system.

“The benefits of having a vehicle-agnostic solution is that all the data flows into one stream, allowing us to see every vehicle on one screen, irrespective of type. Having one system to operate through is of real value to the business. I don't want multiple systems from multiple OEMs – that's just confusing and unhelpful.”

What’s more, the platform has enabled more general intelligent energy usage in the building. “10 of the chargers we have on site are vehicle-to-grid (V2G)” continued Mr. Clarke. “We’re now able to use the excess energy at the end of the day to power the building. In doing so, we’re avoiding taking any energy from the grid at peak times and able to recover the lost energy off-peak at say, 2 or 3 in the morning.”

This data-enabled modelling also provides Gnewt a future roadmap to intelligently trade energy with the grid, discharging excess energy when it is more expensive and actually turn a profit on it. “It will only work if we have that Geotab data on the state-of-charge of those vehicles to inform these sorts of decisions.”

Battery degradation is something Gnewt will also have to consider in future. As a significant, but long-lead variable on vehicle life cycles – especially as a company that leases much of its fleet from OEMs – Gnewt plans on using battery health data to help inform whether each vehicle renewal makes commercial sense or whether to upgrade to a newer model.

The results: A scalable and profit-driven solution

Despite being relatively early in its journey with Geotab, the results already speak for themselves. With the state-of-charge data alone, Gnewt has managed to increase the number of vehicles it is able to charge over the course of one working day from 30 to up to 80. The feed has helped them use every ounce of power possibility over each vehicle’s dwell time. This increased scale equates to hundreds of tonnes of CO2 delivery emissions saved and hundreds of thousands of emission-free miles driven each year.

From the Fleet manager

“It is absolutely essential that we are able to have a direct API with Geotab, so that we can get the data on state of charge and which vehicle plugged in where, with our charging infrastructure provider's software. This robust data means Geotab is helping us to be a smart, emission-free, commercially viable fleet solution equipped to scale.” 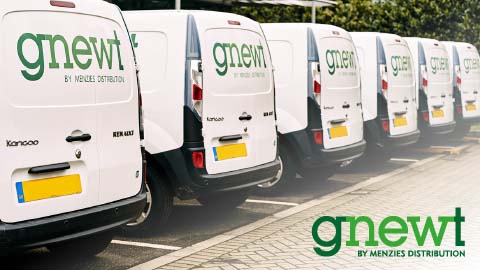 Watch this video to learn more about how Franklin County trusted the Geotab solution to take the guesswork out of their public works fleet management strategy.

Bringing solid waste operations to the future with automated processes in Spokane, WA.

Telematics technology developed in Canada will help improve deep field safety of the BAS team in the South Pole.

City of Austin, Texas: Managing fleets with telematics in a once-in-a-century storm

The City of Austin, Texas showcases the power of telematics in their response to a once-in-a-century storm that hit the Lone Star State in February 2021.

Ready to optimize your fleet?