Toronto, Ontario - April 23, 2019 - Geotab, the world’s leading connected vehicle company for smart city and fleets, today revealed a new study that analyzing commuter sprawls across 20 major cities in the United States. The results depict varying travel patterns across America and identify the U.S. cities with the longest and shortest commutes. The interactive piece, which also ranks the least and most reachable city centers, can be accessed in full here.

Utilizing the 2012-2016 CTPP tabulation of the American Community Survey, Geotab examined data from more than 14 million commuters, calculating mean commute times from census tract areas across the U.S. travelling into 20 of the biggest cities in America. The company then used this data to create detailed maps visualizing these complex travel patterns, highlighting the true commuter boundaries of each of these cities.

“These maps provide us with an alternative way of thinking about cities. A city doesn’t necessarily stop at the official city boundaries — instead, they continue to sprawl much further thanks to the commuters that travel in and out of these areas for work throughout each and every single week,” said Maria Sotra, VP of Marketing at Geotab.

According to the results of Geotab’s Time to Commute study, the U.S. city with the longest average commute was found to be New York City, with those commuting into the city spending 43 minutes travelling on average. Commuters in NYC also face the longest commute by transit (53 minutes) and the city was identified as America’s least reachable city, with only 4% of commuters able to travel into the city in half an hour or less. Additionally, only 28% of NYC commuters can access the city within 30 minutes by car,  while just 6% of public transit users can access the city within 30 minutes.

At just 26 minutes, San Diego was named as the U.S. city with the shortest average commute time.The coastal Californian city also has the shortest commute by car (26 minutes) and was deemed as the most reachable, with 72% of commuters able to access the city within 30 minutes. While 77% of San Diego commuters travelling by car can travel to the city within half an hour, only 17% of public transit users can commute into the city within half an hour. The most reachable city for public transit users is Minneapolis, which 31% of commuters can travel into within 30 minutes.

“This research also highlights the need for ongoing investment in transportation infrastructure across the country,” added Sotra. “The stark contrast between how many cities are easily reachable by car versus those that are easily reachable by public transit suggests that there is still some way to go in ensuring that these cities can be accessed in a reasonable amount of time regardless of your mode of transport.”

The full results of Geotab’s Time to Commute study can be seen in the below tables. 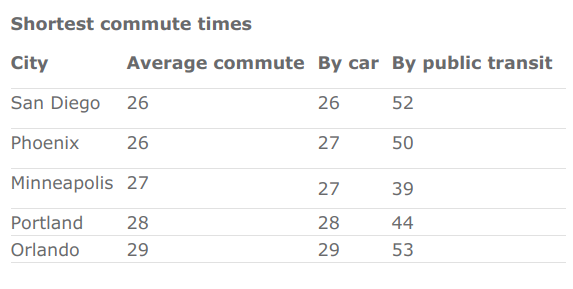 For the largest city in each of the U.S.’s 20 largest metropolitan areas by population, data from the 2012-2016 CTPP tabulation of the American Community Survey was used to calculate mean commute times from every census tract area in the U.S. to any tracts mostly contained within the city boundary. For tracts with data for fewer than 250 commuters for the relevant transport type, data was supplemented with weighted average commute times from surrounding tracts. Maps rendered based on geographical data from US Census TIGER/Line® Shapefiles.

Analysis reveals U.S. cities with the most (and least) green space