May 21, 2019 – A road trip is a fantastic way to explore America’s vast scenery and attractions — but with so many possible routes, how do you know which is truly the best? A new study from Geotab attempts to solve the problem by using data to rank 50 of America’s favorite road trips. You can explore the Road Trip Ratings study in full here.

Geotab identified 50 popular road trips and used TripAdvisor data to rate each itinerary in terms of attractions, accommodation and places to eat. It also analyzed official traffic data to rate each route based on how busy the roads typically are and conducted a survey to rate how long the trips take to drive.

Geotab then created a points system, assigning different weightings with each element of the road trip, in order to produce an overall ranking identifying the top road trip destinations.

Below are the top 10 highest ranking routes (all scores are out of 100): 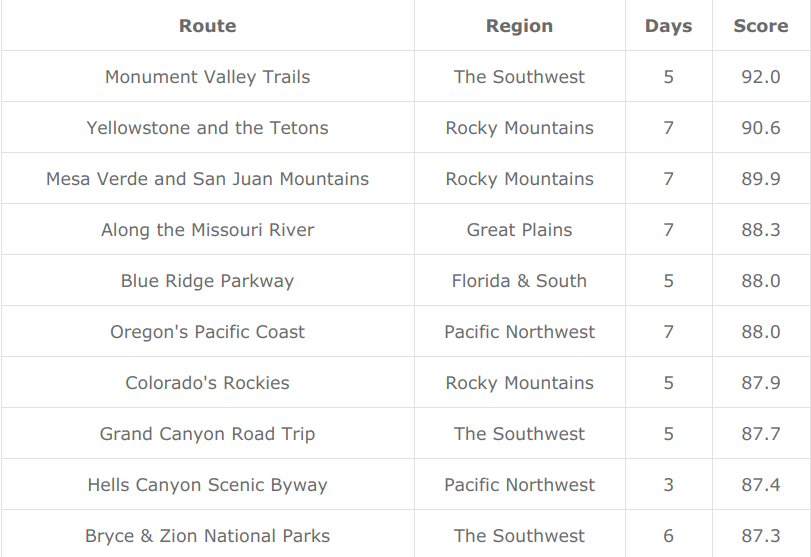 Three routes in the Rocky Mountains were among the top 10 — namely Yellowstone and the Tetons, Mesa Verde and San Juan Mountains and Colorado's Rockies — alongside a further three routes in the Southwest (Monument Valley Trails, Grand Canyon Road Trip, Bryce & Zion National Parks).

Although Route 66 is one of America’s most iconic road trips, the study suggests that the journey fails to live up to lofty expectations. In fact, of the 50 routes included in the study, Route 66 places 44th.

Of the 50 road trips featured in the study, the average time it takes to complete a journey is 5 days, with the longest being a tie between Route 66 and The Best of California (both 14 days). Meanwhile, the shortest journeys featured are Lake Champlain Byway and Maryland's Historic National Road, both of which take 2 days to complete.

Traffic can make or break a road trip. The route that was noted as the best for traffic levels is Monument Valley Trails, while somewhat unsurprisingly, Disneyland and Orange County was named as the worst road trip in terms of traffic.
Travelers looking for the best accommodation to stay in throughout their road trip should head to The All-American Acadia Byway or the Blue Ridge Parkway, which both score highest for accommodation offerings. And although The Blues Cruise is an ideal trip for music lovers, it placed last of all 50 routes for accommodation along the route.

Routes in California ranked relatively poorly compared to others in the dataset. Of the six California route trips featured, the highest ranking was the Eastern Sierra Scenic Byway, which placed 32nd out of 50.
Geotab also highlighted five different routes that are best for different purposes:

“Road trips are a quintessentially American way of traveling. With so much different scenery accessible via the country’s sprawling infrastructure network, U.S. road trips are a vacation in and of themselves,” said Maria Sotra, VP of Marketing at Geotab.

“There are countless references to road trips in literature, film and music, and this has given certain stretches of road legendary status — Route 66 being a perfect example.”

“But with so much variety to choose from, settling on one route can be a seriously tough task. We created this study to see how U.S. road trips stacked up when data is brought into the equation.”

Raw scores for duration, attractions, accommodation, food and traffic were assigned % weights, giving each trip a score out of 100. “Good for…” categories were determined based on share of attractions from TripAdvisor. Research was conducted in April 2019.

New data shows the majority of car buyers expect to go electric, but fears over lack of charging infrastructure and vehicle range could still hold adoption back

Geotab Prevails in Another Patent Lawsuit