Published on August 5, 2014 in Fuel by Darren Beams

The fuel used statistics found within the Fuel Usage Report on MyGeotab - a fleet management software, are crucial information for most fleet managers.

The fuel used statistics found within the Fuel Usage Report on MyGeotab are crucial information for most fleet managers. However, these statistics are not always readily available on many passenger vehicles. Geotab uses several methods to retrieve information on fuel usage from all vehicles, with some being more accurate than others.

Passenger vehicles and small commercial vehicles are the biggest problem when it comes to getting reliable fuel usage data. Even though instantaneous fuel is a part of the OBD II specification, not many vehicles support it. This means that Geotab has to come up with other methods for retrieving information on fuel usage. Currently, that entails using the amount of air used by the vehicle, called mass air flow (MAF), and then working out the fuel used based on the fact that air used and fuel used differ by a constant ratio. Unfortunately, this is only true for gas vehicles - diesel vehicles need an additional parameter in order to get fuel used from MAF and not all vehicles provide it. An additional problem that one runs into is that not all vehicles have MAF either, which means that Geotab must come up with other alternatives. These may include using manifold air pressure to infer MAF or tracking down fuel usage data on a vehicle-type by vehicle-type basis. 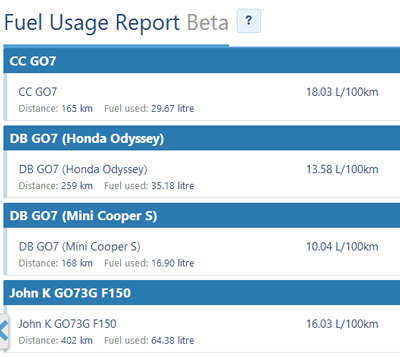 Getting fuel usage from heavy-duty vehicles

Fuel used is a part of the heavy-duty engine data specifications and it is rare that Geotab is unable to get fuel usage from a traditional heavy-duty vehicle. However, some heavy-duty vehicles do not make use of the standard heavy-duty protocols and on these vehicles one must then resort to the same techniques used for passenger vehicles.

Recently there was a customer’s vehicle that had lost fuel usage data after it had been reporting it successfully for an extended period of time. Geotab’s support team investigated the GO device data and found that there was no firmware update that could have caused the issue, nor was there any device fault information that would attribute to the sudden loss of fuel. Further investigation of the vehicle data reported by the GO device showed that the vehicle had an engine fault that indicated an issue with its MAF sensor. After the customer fixed the vehicle MAF sensor, fuel usage information returned.

Geotab is continuously striving to make sure that the fuel used feature is accessible in as many vehicles as possible. The company is continuously investigating and testing new and better ways to retrieve fuel data, while ensuring that it is as accurate as possible. 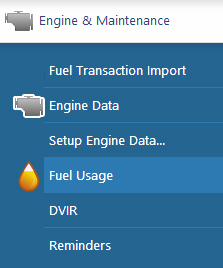 Darren Beams is Vice President, Embedded Systems Development for Geotab, working with Geotab since the inception of the first North American released Geotab GO device in 2002.