Start and stop technology in the quest against idling

Published on April 6, 2015 in Fuel by Stefano Peduzzi

As every fleet manager knows, a reduction in idling time is both beneficial and cost effective. It provides savings in the form of lower fuel consumption and reduced maintenance costs, thus extending vehicle life and a reduction in emissions.

As every fleet manager knows, a reduction in idling time is both beneficial and cost effective. It provides savings in the form of lower fuel consumption and reduced maintenance costs, thus extending vehicle life and a reduction in emissions. An idling engine consumes fuel only to keep itself and the vehicles accessories running – fuel economy is at zero miles per gallon! As a fundamental Key Performance Indicator (KPI), Geotab provides several rules and reports to help better inform drivers about idling and to help fleet managers achieve their targeted goals in cost reductions.

What if there was a built-in technology that could help drivers automatically reduce their idle time? The technology already exists today.  Start-Stop Systems are available across a range of auto manufactures. The principle is very simple: a start-stop system allows an engine to be automatically shut down when a vehicle comes to a complete stop and is engaged instantly when needed. For example, on approaching a red light the engine disengages when the vehicle comes to a complete stop. When the light turns green and the brake pedal is released the engine engages and the car functions as per normal.

This technology has been around for some time. Fiat and Volkswagen launched models equipped with the Start-Stop System in back the 80s. It wasn’t until 2010, when pressure from the new Euro V emissions regulation in Europe enticed manufactures to more widely implement the technology. The major difference between North America and Europe in respect to fuel price at the pump has helped Europe stay ahead of the curve. Roughly 45% of cars built in Europe today come equipped with the Start-Stop System, while the United States lags behind, with only about 500,000 new cars sold in 2013 equipped with it. The Detroit “Big Three” are implementing the system on more of their models each production year.

How do Start-Stop Systems work?

For automatic transmission vehicles the system is fairly straightforward: when the vehicle comes to a stop the engine goes into standby mode. When the driver releases the brake pedal the engine automatically comes back to life. For manual vehicles it is slightly more complicated. When the vehicle stops the driver has to depress the clutch, put the gear in neutral and release the clutch to activate the stop mode. The engine turns on as soon as the clutch is depressed again.

While the principle of operation is simple and the same across all vehicles, different technologies implementing Start-Stop Systems have been developed by various vehicle manufacturers with two systems (Belt Driven Starter Generator and Enhanced Starter) dominating the market today.

The Enhanced Starter Start-Stop System consists of a modified starter motor to handle the strain of added starts on the engine compared to a conventional starter motor. The system also uses a modified generator for recuperation. The main advantage of this technology is the low cost of implementation (minimum changes are required in the vehicle design) but it typically suffers from rough restarts and slow response times (the engine has to be completely stopped before it is possible to turn it on again).

The Belt Driven Starter Generator (BSG) system utilizes a different method to start the engine: a reversible alternator which also acts as an electric motor, in this case mimicking a starter motor. The BSG is integrated into the belt drive system of a conventional combustion engine in the same way a normal alternator is, as it has the same fixing points. The main difference with a standard belt drive system is the reinforcement of the belt tensioning, the BSG acts bidirectional on the belt to speed up the combustion engine during start-up.

For small engines a conventional starter is not needed while it is required for larger ones.
The main advantages of this solution, other than the moderate cost, are the smoother restarts  provided and the capability to stop the combustion engine while the vehicle is still driving (up to 20 km/h for automatic and 8 km/h for manual).

Valeo has pioneered this technology, and today also Bosch and Denso have this type of solution. PSA (Peugeot and Citroen), Mercedes-Benz and Smart in Europe and GM in North America are the main manufacturers offering models featuring BSG solutions.

Recent developments have introduced the possibility to boost the engine during phases of acceleration, providing a micro-mild hybrid vehicle type.

A Direct Starter uses direct injection and combustion to instantly restart the engine. The principle design of this system is to position the piston in an optimal position during the vehicle stop, so as to instantly restart the vehicle by injecting fuel into the cylinder. Mazda have developed this technology internally, with the main advantage being quick restart response time.

The Integrated Starter Generator (ISG) combines the conventional automotive starter and alternator (generator) into a single machine that is fitted directly to the engine crankshaft. Other than Start and Stop ISG can also be used to recuperate energy from regenerative braking.  Also, similar to Direct Starter solutions, vehicles with ISG are usually termed as Mild-hybrid, as they not only provide functions as start-stop and recuperation but also provide additional boost during acceleration.  The main advantages of this system are a relatively simple design more resistant to wear and the possibility to power assist the engine. This comes at higher costs in comparison to other solutions. Continental and Bosch alongside Honda are the main provider of these type of solutions.

Fuel economy gains from Start-Stop technology are typically in the range of 5 to 10 percent: measurements taken in the New European Driving Cycle (NEDC) yielded fuel savings and emission reductions of around 8 %. Savings of up to 15 % are possible in real urban traffic.   North American studies have shown similar results conducted by AAA: three vehicles equipped with automatic stop-start systems were tested using the EPA’s “urban” driving cycle and an improved fuel economy of up to 7% was recorded while the automatic Start-Stop System was engaged.  It should be noted that the different technologies provide different results: Belt Starter Generator can provide better results than an Enhanced Starter, while the Integrated / Crankshaft Starter Generator is the one providing the higher fuel savings.  FEV provides an interesting comparison of the different technologies, showing there is no clear winner: 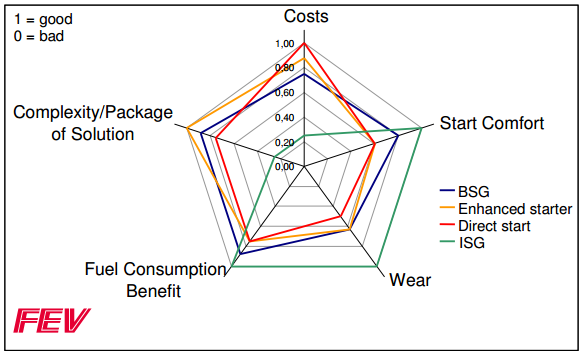 Several criticisms have been expressed in regards to the Start-Stop technology, and while some can be classified as “urban myths” others should be considered.

From a drivers point of view, detractors say the feature is annoying, leading them to believe their cars have stalled when the engine shuts off at a light or stop sign: this comment is more common in North America, where the technology isn’t as widely known.  This clearly indicates the need for fleet managers to clearly communicate with their drivers when these systems are introduced.

Another common complaint is the restart delay. While this can be true with Enhanced Starter technology, the other systems address it well.  For example Mazda is quoting 0.35 second delay for their i-Stop solution.

The final “myth” is that  starting an engine burns more gaso­line than idling for an hour: while a cold engine runs rich, consuming more fuel than normal, an engine already at optimum operating temperature does not use an excessive amount of fuel starting and stopping. Bosch says that in combination with a modern gasoline engine, the amount of fuel required for warm starting is only the same as that used when idling for 0.7 seconds.

There are two areas where concerns around the effectiveness of Start-Stop System have more solid ground: the additional wear that the increased number of engine start and stops will bring and if the savings provided actually cover the additional cost of the Start-Stop system itself.  Regarding the additional wear to some of the engines components, i.e. battery and starter motor, have been specifically engineered for the extra usage and will not be affected.  There are, as of yet, no analysis on what long term effects there could be to certain components.  Especially concerning turbochargers and crankshafts.  It should also be noted that long-duration idling causes more oil and oil filter deterioration and increases the need for more oil and filter changes. Similarly, the longer the idling time causing wear, the sooner the engine itself will need to be rebuilt.

On the cost vs benefits side, the Environmental Protection Agency does not take into account the effects of stop/start technology in its fuel economy testing, with an EPA representative declaring to The Huffington Post – in stark contrast with the AAA findings –  that “Starting/stopping a vehicle’s engine has little, if any, impact on fuel economy.” The editor of Green Car Reports, a website dedicated to environmentally friendly vehicles, echoed the EPA’s statement, telling The Huffington Post the systems typically only add 0.1 mpg to a car when subjected to the EPA’s fuel economy test cycle.

A lot of debate arises around how test cycles are disconnected from how motorists drive, and its effects on automotive manufacturers. For example, Mazda says a Mazda 3 with i-stop gains only 1/10 of 1% on the EPA city cycle and therefore, U.S. Mazdas will do without stop-start while in Japan the city-cycle test has 40 seconds of idling, so the cost of i-stop is justified there.

The Benefit of Telematics

We can identify two areas where the use of Telematics can help the adaptation of Start-Stop technology in a fleet:

We’d love to hear from you, let us know your view on Start-Stop System technology by commenting below.

Stefano Peduzzi is the Director Technology, Europe for Geotab, specializing in the evaluation and development of new technologies, particularly in start up companies and business units.

Is sustainability good for business? Yes!

Going green is good for the planet and can benefit your bottom line.