Interactive map reveals the beauty of 10 historic ghost towns in the U.S

Toronto, ON - October 17, 2018 - Geotab, a global leader in IoT and connected transportation, today revealed an interactive map showcasing historic ghost towns across the United States. Gathering data from over 3,000 abandoned towns across the country, the piece showcases the number of ghost towns in each U.S. State and highlights 10 striking examples of these historic communities.

“In many parts of the world, people may wander around ancient ruins, but they rarely encounter a true ghost town, stated Peter Ling, Professor of American Studies at the University of Nottingham. “In contrast, Americans know them as vivid reminders of the country’s compressed, dynamic and turbulent past: places that once thrived because of rich natural resources, viable transportation links, and booming populations, but then faded away.”

Geotab’s “Ghost Towns of America” map series allows users to explore the cities with the most neighboring ghost towns within a 25 to a 50-mile radius or by location and distribution across America’s states and counties. Focusing on history and the structural remains left, the piece spotlights 10 compelling examples of American ghost towns by diving deeper into their story and showcasing a selection of high-res photos that allows users to explore what these towns look like today.

The 10 ghost towns featured by Geotab are: 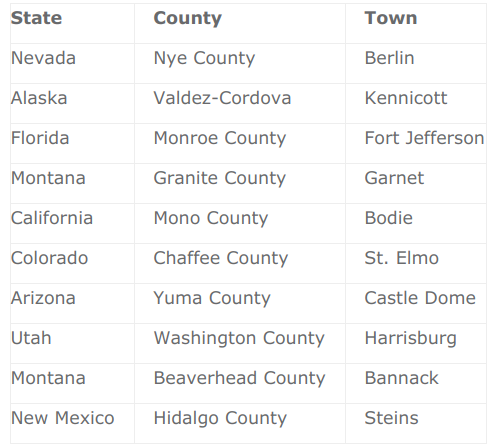 “These ghost towns are places that Hollywood has seeded in our heads, where outlaws ride into town while miners gamble away newly acquired fortunes,” added Ling. “A trip out west is rarely complete without a visit to a ghost town, giving those places a second chance to thrive; heritage tourism can be a mother lode they continue to mine indefinitely.”

The states with the highest number of ghost towns are Texas (511), California (346) and Kansas (308). On the other hand, Rhode Island and Connecticut are home to the fewest, with just one and four respectively. Additionally, the counties with the most ghost towns are Kern County in California (113), Lawrence County in South Dakota (93) and Indiana County in Pennsylvania (36).

“The story of America is one of change. Many towns were built thanks to the growth of infrastructure, trade, and transport in the U.S., but those that have been abandoned leave behind a rich history. America’s ghost towns continue to serve as a useful reminder that the past can teach us a lot about the present.” said Maria Sotra, VP of Marketing at Geotab.

Explore the interactive map of ghost towns in full here and a press pack of imagery can be accessed here.

To create the interactive map, Geotab collected lists of ghost towns in each U.S. state using a range of books and websites including ghosttowns.com and roadsidethoughts.com (full sources list), then identified the location of each (to a minimum precision of county level). Geotab then picked 10 historic ghost towns based on the nature of the story behind them and their abandonment, structural remains left on the site and the quality of photography available (factual sources; photo credits).

Peter Ling is Professor of American Studies in the Department of American & Canadian Studies. He is an author and regular contributor to BBC History and other magazines. Currently, he is working on the different ways American heritage is presented to both domestic and international audiences.

Analysis reveals U.S. cities with the most (and least) green space

Challenge drivers around the globe to help support safer communities by slowing down, leaving room and keeping vehicles in good working condition

QEV Technologies helps boost the transition to electromobility with Geotab