Our economy is in the midst of a technological revolution that has been labeled Industry 4.0, where computers and automation are coming together in “smart” ways to redefine the way the world operates (1). As a result of emerging technologies, government fleets are facing new challenges while embracing exciting opportunities. Those who are just embarking on the telematics journey can learn from leaders who have already taken the plunge.

One such frontrunner is the State of Utah Division of Fleet Operations, which recently completed the first year of a telematics pilot program using Geotab’s fleet tracking solutions. To date, the State of Utah has realized improvements in a number of key cost savings areas and is extending the telematics program. This white paper provides an overview of the pilot and outlines short-term success and future goals.

Geotab would like to thank members of the State of Utah Division of Fleet Operations for their valuable contributions and expertise provided during the development of this white paper. In particular, we are grateful to Jeff Mottishaw, Director of Fleet Operations, as well as Michelle Brown, Coordinator of Resource Stewardship, and Eric Gardner, Motor Pool Manager.

Findings are based on the results published in: “Geotab Pilot Study: Year One Summary Report” by the State of Utah, Department of Administrative Services, Division of Fleet Operations (2).

About the State of Utah Division of Fleet Operations

The division directly manages approximately 4,500 vehicles, although a telematics rollout could potentially benefit closer to 8,000 state vehicles and 40,000-plus drivers (including departments with delegated authority to manage their own fleets). Fleet Operations utilizes a range of vehicles, from sedans to one-ton trucks, to accommodate the widely varied functions of employees in departments such as Human Services, Corrections, Public Safety, Agriculture and more.

The vast geography of the State poses a unique challenge for implementation, as does the agency’s commitment to procuring an assortment of makes and models—based on the lowest lifecycle costs and environmental impact—rather than making a uniform investment. But forward-thinking professionals in the division are maintaining an award-winning fleet by staying in the loop with the latest innovations, earning recognitions such as the NCSFA 2017 Fleet Excellence Award, the 2018 Governor’s Award for Excellence and a 2018 Green Fleet Award from Utah Clean Cities. According to Jeff Mottishaw, Director of Fleet Operations, using a telematics solution “allows us to further our own mission and improve above and beyond what we could have in the past.”

Overview of the telematics pilot

The key objective of the State of Utah Division of Fleet Operations (DFO) in conducting the large telematics pilot was to validate the effectiveness of fleet tracking systems in reducing overall operating costs and lowering overall cost per vehicle mile.
Some goals the State hoped to achieve:

Vendor selection was determined by a number of factors, including the ability for the solution to work in different regions (both rural and urban areas); user testing experience; pricing considerations; and whether the solution was already on a statewide cooperative contract. A short test was conducted on telematics units for several months. Ultimately, the State chose Geotab and was able to procure it through the National Association of State Procurement Officials (NASPO) ValuePoint cooperative contract.

A recommendation by staff members who favored Geotab’s ease of use and vehicle tracking options provided the State with further confidence in the solution. Geotab’s willingness to offer a large volume discount solidified the decision.

There were a total of 1,296 units installed during the first year of the pilot, which began in January 2017. This represents approximately 25% of the fleet managed by Fleet Operations and included a broad variety of use types across the state.

Figure 1. Timeline of the installation phase of the pilot

Many of the largest fleets in North America and around the world rely on Geotab’s data-driven solutions to improve safety, efficiency, and sustainability. Collecting billions of points of data each day, Geotab provides critical intelligence to lower fuel costs, reduce maintenance, and improve asset utilization. With a robust ecosystem of partner solutions and apps, Geotab can support the needs of every level of government — federal, state, and local.

Key features of the Geotab open platform for telematics:

Geotab is a diagnostic fleet tracking solution which allows fleets to collect critical engine data from the vehicle for all major engine protocols such as rpm, voltage, fuel usage, coolant temperature and fluid levels, plus seat belt usage, engine-based odometer readings (matching the vehicle dashboard), and accurate idling information. Collection of engine diagnostics makes it possible for fleets to track fuel efficiency and idling, supporting management and reduction in fuel costs. Additionally, by monitoring engine faults, problems can be detected and responded to early, before they lead to costly downtime or potential safety issues.

The method of logging and storing GPS and engine measurements strongly determines the quality and accuracy of the data, which in turn affects the resulting fleet improvements. Curve Logging is Geotab’s patented method of moving data efficiently from vehicle to server. The curve-based algorithm is used in the telematics firmware to determine which of the data points should be saved and transmitted. The purpose of the algorithm is to preserve the most important information while providing high data accuracy and minimizing data overhead.

Geotab applies analytics and machine-learning principles to the mass of data collected from connected-vehicle sensors across the globe. Data is collected from engine measurements, GPS, corporations and government agencies across the United States.

Geotab holds security as a first priority and continuously reviews and updates security mechanisms and processes to provide the highest level of security and privacy for customers and partners.

Telematics is also valuable in the context of managing fleet total cost of ownership (TCO), operating expenses and profitability. Open platform telematics can help fleets discover not only potential return on investment (ROI), but also the cost of ignoring (COI), which is the lost savings—or higher costs—of not making an investment in operating efficiency. Geotab’s Fleet Savings Summary Report uses rich data to estimate a fleet’s existing and potential cost savings in the areas of safety, fuel, maintenance and productivity (3). By pursuing these savings opportunities, a fleet manager can reduce their COI, improve their fleet’s operating efficiency and grow their bottom line. Conversely, managing a fleet without a telematics platform is likely to result in higher costs and poor visibility for improvement.

With Geotab telematics and strategic initiatives, the State of Utah realized a number of quantitative and qualitative benefits in the focus areas of fuel, maintenance, accidents, and utilization.

After implementation within the four pilot agencies (DAS, DABC, DHS and Corrections), the average MPG increased by approximately 2 MPG, representing 8% improvement since August 2017.

Geotab data revealed that agency vehicles drove up to 1.4 M miles and consumed up to 54,000 gallons of fuel every month. With an estimated fuel cost of $3.00/gallon, the following savings were realized (2):

Fuel savings were achieved primarily through a reduction in idling and speeding. Eric Gardner, the division’s Motor Pool Manager, says, “Our governor limits idling, but we couldn’t know if people were doing it.” He appreciates that telematics is helping the division achieve success in its policies. Mottishaw agrees, saying, “I was really surprised at how much idling our drivers were doing and how easy it was to affect change.” 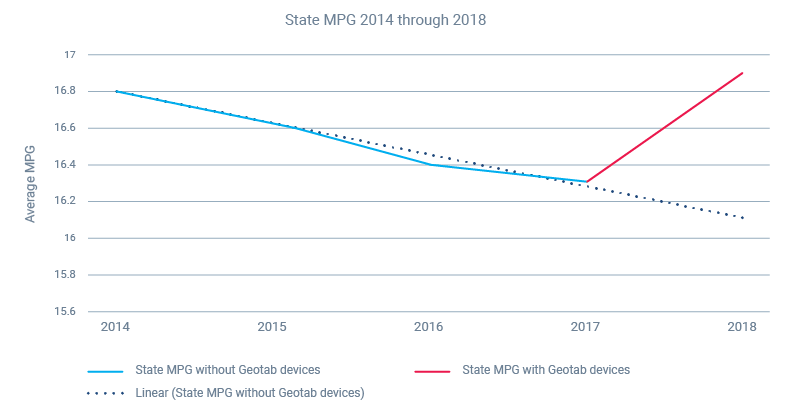 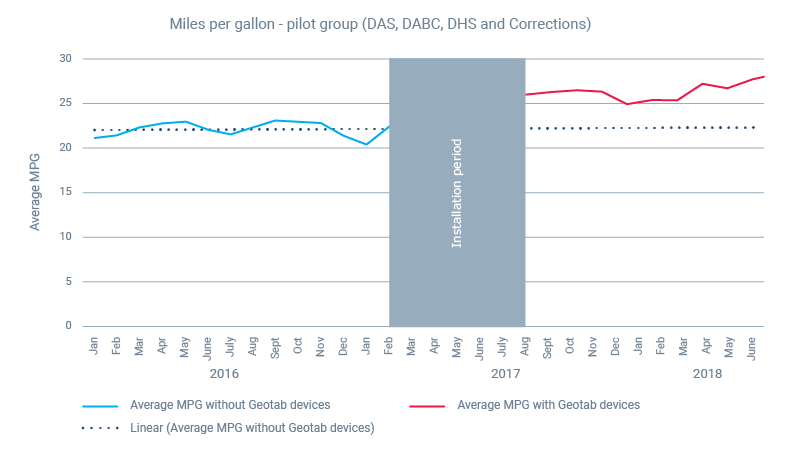 Since the deployment of telematics, work order costs within the four program agencies have decreased by $90K compared to 2017, and $75K compared to previous years, representing a 20% improvement since June 2017. These vehicles produce over 4,000 work orders per year, which represents a large portion of each vehicle’s total cost of ownership.

As a result, the following savings have been realized (2):

Maintenance savings were achieved by monitoring aggressive driving, check engine light alerts and low battery notices. Mottishaw says, “Geotab has just nailed it perfectly. We can set up rules specific to the use-case scenario without additional staff effort.” He appreciates the reporting features that enable management to be notified through scheduled emails or by real-time alerts when an issue needs to be addressed. 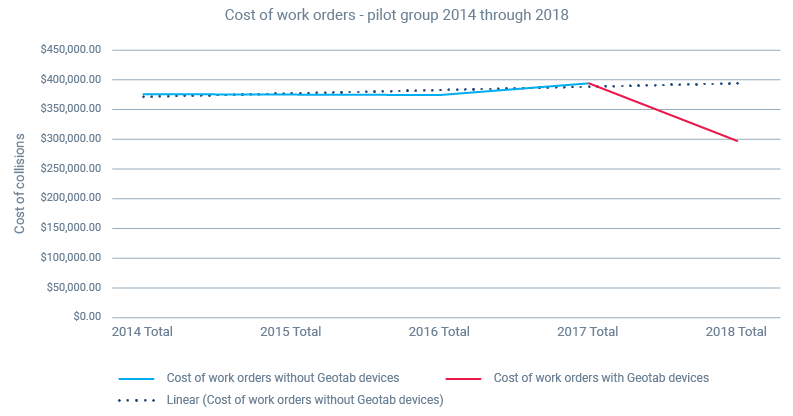 Since implementing telematics within the four pilot agencies, first party collision costs have lowered by $36.7K when compared to historical trends, representing a 21% reduction.

These collision costs are summarized below.

Accident savings were achieved by monitoring seat belt usage and driving behavior. Gardner says it was surprising to find out how many drivers were not consistently using seat belts. “It’s amazing to be able to have your hands in the data,” he explains, “and to make decision that benefit the fleet and your driver’s lives.” 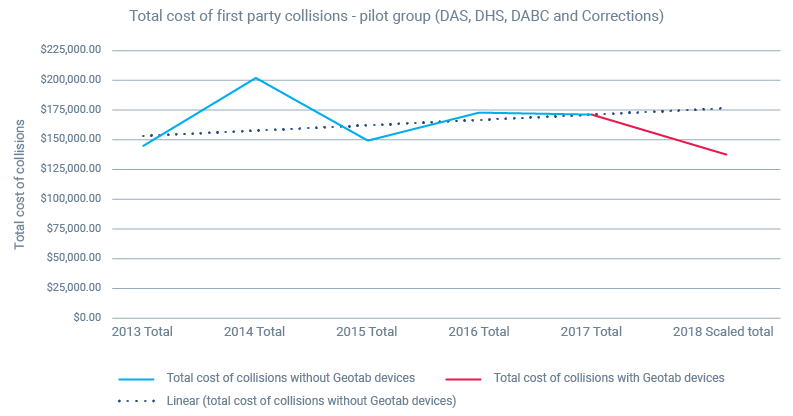 Telematics solutions also offer valuable insight regarding fleet utilization. According to the State of Utah’s current mileage standards, 340 vehicles in the four pilot agencies do not meet the minimum monthly mileage standard. By eliminating these vehicles, the division stands to save a significant amount of money (2):

The State of Utah identified another two areas of incremental benefits for agencies:

Based on the study of 1,091 vehicles from the four pilot agencies (DAS, DABC, DHS and Corrections), the State of Utah generated a summary of savings values based on monthly and annual analyses, excluding utilization savings (2).

Table 2. Savings summary (with telematics in 25% of fleet)

Key findings of the State of Utah pilot study of Geotab telematics:

The State notes that making a conclusive determination as to the level of correlation would require more data.

Mottishaw says telematics solutions may sound too good to be true, but his experience has been that you can obtain tangible fleet improvements. He says the Geotab platform more than pays for itself by enabling the fleet to achieve significant savings.

Mottishaw credits telematics for helping fleet managers do their job better because of access to information that was previously unavailable. Gardner agrees, adding, “You can answer questions that you wouldn’t have been able to answer before without the data.” In his opinion, the most rewarding part of the process has been that “it actually works.”

Based on current savings, the State of Utah deems that the pilot is successful and warrants further investigation and extending the program for an additional 12 months. The full value of the pilot program will be seen as the participating agencies move forward on publishing and enforcing internal policies regarding telematics rule thresholds, and proactive driver coaching and safety initiatives.

Evolving technology will continue to bring new opportunities to government fleets, and the division intends to take advantage of innovations like predictive analytics and smart state insights. The possibility of moving from reactive to predictive maintenance cycles, among other capabilities, is becoming a reality with telematics. Fleets are also a potentially rich source of data that can be used to generate city or statewide insights to improve transportation efficiency, citizen safety and environmental sustainability. With the Geotab platform in place, the agency is poised for expansion during Industry 4.0, putting the State in a secure position to handle further disruption.

To learn more, please visit follow us @GEOTAB and on LinkedIn.

Save a copy for later

Municipalities are undergoing a digital transformation that will revolutionize the way cities are managed.

Learn how collision reconstruction with telematics can be a useful tool for insurance purposes, driver training and potential litigation.

Learn how a customizable, open platform can help match the needs of a modern fleet.

Fleet 2020: How UK fleets can lead the way to an electrified future

Read how UK fleets are changing in 2020 and beyond.