Air pollution poses a serious health risk in Europe. Read about air quality and learn what the Mobile AirQuality Measurement project is doing.

You could go days without food, hours without water, but you would last only a few minutes without air. On average, each of us breathes over 11,000 liters (or 3,000 gallons) of air each day. You must have air to live.

The Mobile AirQuality Measurement project is a collaborative initiative between Center Smart Services on RWTH Aachen Campus in Germany and Geotab GmbH.

Air pollution is the biggest environmental risk to health in Europe, according to the World Health Organization (WHO). A 2018 special report by the European Court of Auditors states that people in urban areas are most affected, with air pollution causing “about 400,000 premature deaths, and hundreds of billions of euro in health related external costs” each year in the EU.

Sources of air pollution vary with urban areas being different from rural areas. Household heating and road transport typically lead the pollution list. Additional impact areas (for instance sea transport) are not that visible to the general public on a daily basis, but have to be considered as well.

However, in most cities, air quality has improved substantially over the last three decades. The visible and noticeable air pollution (smoke, dust, smog) has disappeared from many cities due to local, national and international initiatives.

Nevertheless, the current air quality still affects people's health. In many cities, air quality is a concern and it is therefore monitored around the clock. Industrial air pollution is being replaced by traffic-related air pollution.

The WHO identifies Particulate Matter (PM), Nitrogen Dioxide (NO2), Sulphur Dioxide (SO2) and ground-level Ozone (O3) as the air pollutants that are most harmful to human health. The EEA reported that in 2014, fine particles (PM2.5) caused at least 400,000 premature deaths of EU citizens — that’s about 10 times the number killed by road accidents; NO2 caused 75,000, and O3 accounted for 13,600 premature deaths.

Air pollution affects people on a daily basis. While pollution peaks are its most visible effect, long-term exposure to lower doses poses a greater threat to human health.

Particulate matter (PM) comprises solid and liquid particles suspended in the air. These include a wide range of substances, from sea salt and pollens to human carcinogens. PM is classified as PM10 (coarse particles) and PM2.5 (fine particles), depending on its size.

Nitrogen dioxide (NO2) is a toxic gas of reddish-brown colour and one of the nitrogen oxides (NOX). It is perceptible as an irritant gas with a pungent odor even in low concentrations. As it is hardly soluble in water, it is not bound in the upper respiratory tract but penetrates deeper into the lungs.

Sulphur dioxide (SO2) is a toxic colourless gas with a sharp odour. Exposure to SO2 can damage health by its action on the bronchial system. Sulphuric acid generated from atmospheric reactions of SO2 is the main constituent of acid rain.

Ground-level ozone (O3), or tropospheric ozone , is a colourless gas that is formed in a layer close to the ground by the chemical reaction of pollutants (such as Volatile Organic Compounds (VOCs) and NOX) in the presence of sunlight.

WHO limits and guidelines on air quality:

The possible impacts on human health according to the EEA and WHO are: stroke, respiratory disease, lung diseases and lung cancer, cardiovascular disease, and liver and blood disease.

Although everybody would agree that breathing bad air would have a negative impact on health, a debate within the scientific society continues and keeps the public in an uncomfortable situation on what to believe.

Globally, quantities of nitrogen oxides produced naturally (by bacterial and volcanic action and lightning) far outweigh anthropogenic (man-made) emissions (sources: Faktenfinder; 30 information sheets on Air Pollution). Other man-made emissions are because of non-combustion processes, for example nitric acid manufacture, welding processes and the use of explosives.

Air quality trends: the good and the bad

The good news first. A significant decreasing trend can be observed. (See more in this special report from the European Court of Auditors, “Air pollution: Our health still insufficiently protected.”) All pollutants have been reduced during the past 25 years. Between 1990 and 2015, SOX emissions in the EU decreased by 89% and NOX emissions by 56%. Since 2000, PM2.5 emissions have decreased by 26% (source: EEA: European Environment Agency).

Similar trends can be observed in the U.S. where concentrations of air pollutants have dropped significantly since 1990. During this same period, the economy continued to grow, miles driven on a daily basis went up, and the population and total energy consumption both increased.

Now the bad news. Even today, the annual mean values are still frequently above the permitted limits, e.g. above the EU limit of 40 micrograms per cubic metre of air.

Keep in mind: Any discussion on the values as such is not target oriented, the impact on humans is due to spot emissions.

The idea to start the Mobile AirQuality project in 2018 was based on two problems that became more and more prominent in the news and public discussions:

Let’s have a closer look into the air quality situation in a typical medium-sized city in Germany named Aachen. About 250,000 people are living in this city, distributed over 160 square km.

Air quality is measured by using just two stationary sensor sites. Those two sensors belong to the federal wide network of sensor sites (~450), overlooked by the federal authorities and operated by the national/county authorities. All sites measure PM10, NO2 and other gas concentrations. The results are available online as hourly averages.

If we overlaid a circle on top of the city of Aachen the diameter of such a circle would measure 14 km. Placing the two sensors along the diameter at equal distance, the “meaningfulness” per sensor site is expected to cover a very high area.

To test this assumption, assume a fire inside the city center causes high concentrations of toxic gases. What will be the effect of such a measuring network? Will the air quality in close proximity to the fire have the same contamination levels as much further away? What happens if the wind is influencing the distribution of gases? Wind usually blows in one direction only, with a major influence on the geographical distribution of gases and any sensor reading.

As the impact of bad air on humans is due to spot emissions, it is difficult to establish an objective result that can be broadly accepted. Relying on a low resolution network is not good enough in today’s strive for broad digitization. This applies especially if such a network will be used to support political decisions impacting our daily lives, such as implementing driving bans in the city center due to poor air quality.

Distributing hundreds of stationary sensor sites across one city cannot be the solution either, as each sensor site cost a few hundred thousand Euro.

Converting those stationary sensors into mobile sensors by putting them on a trailer and pulling them along the streets might technically be achievable, but has never been realized as the investment cost would be in the millions of Euros. Not that the accuracy of those sensor trailers would be impacted by vibrations and air dynamics. On top of this, adding more vehicles onto the roads to pull those sensor trailers would be counterproductive for the cause to achieve better air quality in city centers.

In our research, we found a number of existing projects that covered the aspects of air quality measurement initiatives (like citizen science projects Luftdaten.info, BREEZE and Purple Air), low cost sensors and big data visualization tools. In order to add a mobility aspect and create a hyper-local view, we decided to kick-off the Mobile AirQuality Measurement project as part of our university cooperation program in Germany.

Overall, the project is based on the need for high-precision data and information on air quality in cities, to support the optimization of traffic planning and management.

The scope of the project was derived from the following questions that we started asking during the scope initiation process:

We hoped that each participant would get a deeper understanding of the product integration efforts with regards to data flow and component interworking.

The sensor used in the project contains three sensor building blocks. When sourcing the building blocks, we were looking for low cost but good quality modules. The current sensor includes:

The project kicked off in 2018, starting with prototyping, then forward to hardware and software development at the end of year. Integration and testing started in early 2019.

First insights and planned next steps

By now, we have spent quite some time on the CAD design of the sensor housing, printing about 60 something cases (with 6-8 hours printing time per case), using three different controller boards. We learned that the number of available low cost NOx sensors is very limited worldwide and that the shipping from Asia and Europe can take two or more months.

We have had many fascinating meetings and discussions with interested parties and realized that the concept of mobile air quality measurement requires a broad knowledge across the science fields.

Since March, two vehicles are circulating around Aachen city center on a daily basis and 13 sensors are waiting to be added into the local public bus fleet. Ten sensors have been shipped to the team in Canada and one is currently in the UK for evaluation.

We understand that the visualization of big data is complex but manageable and hope to come up with a dataset by the end of 2019.

Special thanks goes to the national authorities that allowed us to visit one of the sensor stations in Aachen (VACW), and even place one of our mobile sensors next to their professional equipment. To realize an autonomous reference sensor, we connected the mobile sensor (#device,id:bD) with a solar panel to a car battery and a GO device and stacked it on the roof of the VACW site. It allows us to permanently compare the sensor readings and to better understand the behaviour of our sensor architecture.

Finally, we assume that qualitative values to assess air quality will be difficult to get using the low cost sensors available today. Resolution, sensitivity and accuracy are a major challenge and various studies, such as Rijksinstituut voor Volksgezondheid en Milieu “Sensoren voor NO2”, have come to a similar conclusion.

Follow the Geotab Blog for more updates on this project.

How the AirQuality project is creating cleaner air in German communities

Are heavy-duty trucks the key to solving air pollution?

Urban traffic congestion: New laws and how to prepare 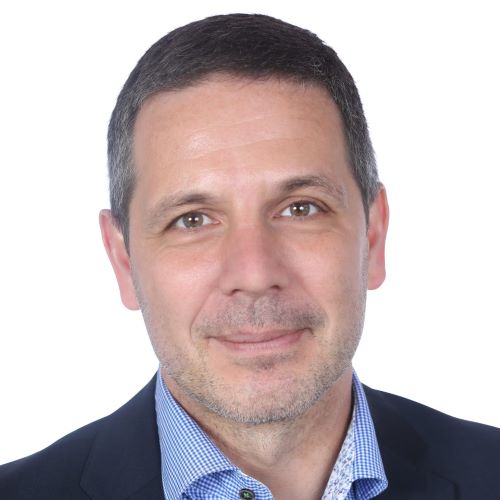 Harald Horn joined Geotab GmbH (Gesellschaft mit beschränkter Haftung, which means "company with limited liability”) in early 2018 to support the market establishment of the brand. With over 20 years of experience in telecommunication, he now helps lead Geotab’s NCEE Solutions and Operations team in Europe.