The ins and outs of route optimization

Published on July 14, 2014 in Fleet Management by Geotab

With the introduction of advanced technology and fleet management solutions, companies and organizations with large fleets have recognized the significance.

Not too long ago drivers of fleets were working from paper maps with directions laid out on paper, in addition to their own memory to come up with the best possible route for reaching desired destinations. But with the introduction of advanced technology and fleet management solutions, companies and organizations with large fleets have recognized the significance of route optimization for improving overall fleet efficiency.

See also:
Five ways a route planner can help improve your profitability
Fleet refueling: The impact of out-of-route and refueling time on business

In an economy of rising fuel prices, routing has proven to be one of the most important features in fleet management. It can significantly increase the efficiency and productivity of the fleet while simultaneously reducing costs. The routing aspect of fleet management has always been especially important to fleet managers. For instance, a fleet manager at a parcel delivery company would be responsible for scheduling a delivery plan every day for each driver using the optimal route. The driver would then follow the pre-scheduled route.

While this may have been sufficient, it was not the most efficient form of management - there was room for simplification to increase productivity. With the integration of routing into the ever-advancing fleet management systems, drivers now follow pre-scheduled routes that have been imputed into the system and sent directly to the specific driver. At the end of the day, fleet managers are able to observe whether the driver has followed the provided route and can then use this as a determinant of individual productivity.

In the MyGeotab fleet management software, users can easily create a route consisting of multiple zones on a map, which the driver can then see from the GPS device in their vehicle.

Geotab also provides a simple way to compare the planned versus actual routes, as well as important information such as: 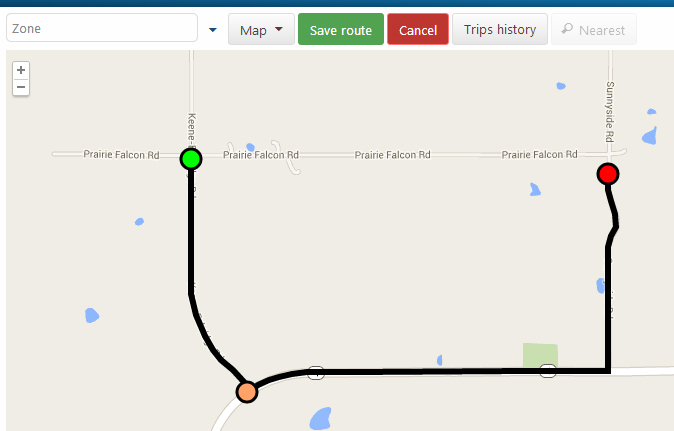 The routing calculation itself can be very complicated.

Many large corporations have developed their own routing calculation system over the years based on their own requirements. Creating thousands of routes one by one, however, is a huge task - especially when routes change over time. In order for users to integrate their routing calculation into the MyGeotab system, and make good use of other fleet management features, MyGeotab provides a comprehensive solution where users are able to import their routes using the SDK.

In a typical case, with the help of the SDK users can import vehicles, drivers, zones, and routes in just a few API calls, and MyGeotab will automatically pick up the route definition. The fleet manager can then go to MyGeotab to view the routes, dispatch the routes, and run different reports over these routes. In addition, because of Geotab’s powerful SDK, users can update their routes regularly.

Connected cars have opened up a world of possibilities for enhancing vehicle performance.