Revealed: the highest road in every U.S. state

Toronto, ON - November 27, 2018 - Geotab, a global leader in IoT and connected transportation, has launched a new study analyzing U.S. road data to identify the highest paved road in every state in America. The interactive piece, which also ranks the top ten most breathtaking views, can be accessed in full here.

By analyzing the U.S. Geological Survey’s National Elevation Dataset, Geotab was able to determine the highest road coordinates in each state. Aside from identifying the highest, reachable peaks, Geotab also leveraged  the expertise of renowned outdoor photographer, Tony Bynum, to help determine the ranking of the ten most breathtaking views in America that can be accessed by hitting the open road.

At 4,757 feet, the highest point of Alaska’s Dalton Highway (in the Atigun Pass on the Continental Divide) was identified as having the most stunning view in America. Taking second place is Colorado’s Mount Evans Scenic Byway. At 14,132 feet at its peak, it is the highest paved road in North America and one of the highest in the world.

“I’ve visited all of the roads on this list and there is simply nothing like Alaska for solitude and breadth of views,” says Tony Bynum, outdoor photographer and conservationist. “In general, western U.S. scenery is the ‘best’, with a tendency to offer better visibility – up to 100 miles on clear days. However, most of the higher elevations in the west are closed in winter, whereas the central and eastern roads are often available all year round.”

The full ranking of America’s 10 most breathtaking views is below: 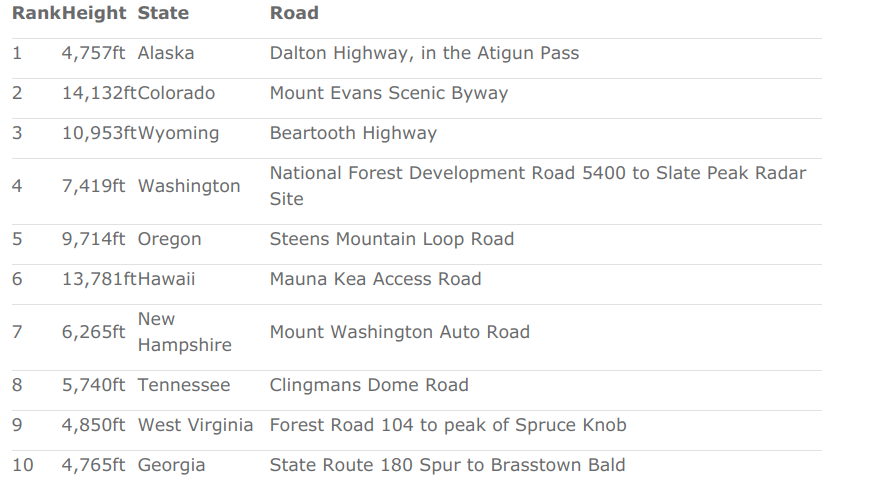 “This piece serves as a useful reminder of the sheer beauty that can be seen across America’s world-leading road network,” said Maria Sotra, VP of Marketing at Geotab. “Thanks to the nation’s ever-growing infrastructure system, you no longer have to embark on a grueling hike or commit to climbing a mountain in order to take in an awe-inspiring view. Instead, breathtaking views can often be seen from behind the wheel of a car.”

U.S. Census TIGER/Line® Shapefiles were used to build a set of coordinates representing segments of every road in the United States, then the U.S. Geological Survey’s National Elevation Dataset was applied to establish the height of each segment. Google Maps and OpenStreetMap data was used to exclude roads that were not clearly accessible via an ordinary road vehicle. Roads were analyzed in October 2018. Main background image of Mount Evans supplied by Airphoto. All photo credits and licenses.